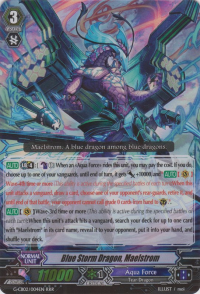 As some of our readers may know, a reader known as Eddie would comment on every post, no matter how big or small, that every article needed a little bit more Maelstrom, much like the one guy in a concert that demands that Free Bird is played. For our dear friend Eddie, it is time that I finally give him what he asked for. Please enjoy this deck list created on April 1, 2017.

The Maelstrom archetype is part of the Blue Storm archetype, which focused on hitting consistent multi-attacks that could hit the vanguard when on a vanguard with “Maelstrom” in the name. Such units focuses on two powerful mechanics, which consisted on preventing the opponent from guarding with grade one or greater units from hand to guard (e.g. Glory Maelstrom) or having the capability to retire rearguards based on whether certain attacks hit or miss the opponent’s vanguard (e.g. Admiral Maelstrom) . Without further adieu, here is the deck list:

The main objective of the deck is to ride Maelstrom “Яeverse” with the intent to finish the opponent off with the limit break. On the fourth battle of the turn and the cost of resting a rearguard and locking it, this limit break allows the player to give Maelstrom “Яeverse” to gain 5k additional power and an additional critical and the ability to retire an opponent’s rearguard and draw a card if the attack misses. To make this effect more powerful, the break ride version of Maelstrom allows the vanguard that rides this unit at limit break 4 an additional 10k power and the ability to retire an opponent’s rearguard, draw a card, and the inability of the opponent to guard with grade 0 units from hand if the vanguard attacks on the first battle. This is similar to Despina, which can prevent the opponent from guarding with grade 0 units from hand when it boosts a “Maelstrom” vanguard on the fourth battle of the turn with the cost of returning to the deck after the battle it boosted. In the event that the player cannot break ride Maelstrom “Яeverse”, the player can attempt to break ride Glory Maelstrom, which has the ability to prevent the opponent from guarding the attack with grade 1 or higher units from hand to guard at limit break 5.

This deck runs Rascal Sweeper and Nikitas in order to help this deck reach the fourth battle. At the end of the battle that Rascal Sweeper attacked a vanguard on the first battle of the turn, and the player’s vanguard has “Maelstrom” in the card name, it can exchange positions with a rearguard unit in the same column as Rascal Sweeper. Nikitas’ generation break one allows it to switch positions with a rearguard unit with the wave ability after the battle attacks the vanguard. Units with the wave ability in this deck include Theta, Maelstrom (Break Ride), Nikitas, and Homeros. In addition to this, both unit are able to reach 11k total power based on certain conditions. Specifically, Rascal Sweeper gains 2k power when a unit with “Maelstrom” is the vanguard, and Nikitas gains 2k power (even outside of generation break one) if it attacks on the first or second battle of the turn. Alekbors also helps with achieving multiple attacks by switching with a unit in the rearguard and returning to deck at generation break one.

The stride deck focuses on having synergy with the normal play with Maelstrom unit as the vanguard. Specifically, two grade 4 units focus on having a Maelstrom heart in order to activate their skills: Admiral Maelstrom and Disaster Maelstrom. Admiral Maelstrom allows the player to flip over a G unit and counterblast one in order draw a card and choose three rearguards of the opponent, forcing the opponent to choose one to retire among the three for each Admiral Maelstrom in the G zone. Disaster Maelstrom can flip a copy of himself when it attacks a vanguard in order to give 5k to three units in the front row if a unit with “Maelstrom” in the name is in the soul.

Images of cards came from http://cardfight.wikia.com/wiki/Cardfight!!_Vanguard_Wiki. These images may have been re-sized.